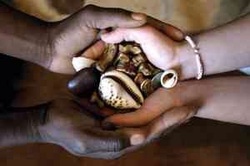 Voodoo as we see it been practised today is a far cry from what it used to be. from Louisianna to India, you will see what is supposed to be a voodoo doll made of cloth and stuffed with wool!! this  is sheer absurbed. it is therefore not a surprise that in Louisiana, Voodoo is considered to be an activity for entertainment. The ancient Voodoo doll of old is made partly of clay and partly of wood. it is calved in an exact replica of a victim in a miniature form. once the calving is complete, the doll with will be animated. Animation means drawing and trapping the soul of the victim into the doll. The animation procedure is performed when the postions of Saturn and Jupita and situated at an angle, we call in voodoo “angle of attack” relative to the sun. Following animation, a pin will be fabricated and consencrated in one the holiest voodoo temples meant exclusively for a particular doll. with the pin in the hands of the Voodoo priest, the victim becomes an object of manipulation in accordance to the will of the Hougan. it could be used to cause harm, separate couples, bind lovers together, attract love, maintain faithfulness in marriages, bring injury, find a missing pet, or used to heal and bring relief from depressions, legal complications, sexual difficulties etc.

Voodoo is a religion that believes you can connect to one god through many different spirits. Voodoo is not very well known as a religion to most countries because of stereotypes. Voodoo started in the West African Nation Benin, and brought by slaves in Africa. It was brought to Haiti as a snake cult hundreds of years later and is now the most practiced religion there. Voodoo is also practiced in New Orleans by many people. Voodoo evolved from ancestry worship and belief.  We  that practice Voodoo believe that one being created the universe; but is too far away from it’s worshipers to have a personal relationship with. For that reason, Voodoo worshipers believe that they can communicate to many different types of spirits through dances, prayers and spells.

Voodoo is very similar to Christianity. Both these religions believe in the one being that created the universe and worship it. Voodoo does not believe that god sent down his son Jesus to sacrifice himself; or that people who worship god have a relationship with Jesus. In Voodoo you believe that in order to have a relationship with God, or the one being that created the universe, you must communicate with the spirits, a lesser power of God. The spirits are also called the Loa. They are ancestors, animals, natural forces such as hurricanes and tornadoes and spirits of good and evil. The Loa is not all good, the Loa can be very dangerous.  Loa can cause pain, illness if treated with disrespect.

People use Voodoo for daily life experiences. To evoke Voodoo it is most likely to be done through a ceremony. During the ceremonies, the spirits come out and listen to the needs of the people. The spirits arrive through Voodoo dances, chants, singing and secret languages. Also at the ceremonies, people sacrifice people, live animals, dead animals, and dead animal parts to fulfill their needs. In Voodoo ceremonies there is an alter that has items representing the spell or ritual at one particular ceremony. These items  on the alter represent the rituals being practiced. The items can be food, money, candles, jewelry, rum, bells, amulets, pictures, drums, stones and many others.

Voodoo ceremonies are organized and lead by the priests. The priest could be a man or woman and is usually not chosen by the people. Priests are hereditary which means if your father or mother was a priest or priestess then you would become the same. Although woman have the option to be a priest, most of the Voodoo priests in the past were male. Every priest or priestess goes through practice and training of the Voodoo religion before officially becoming the priest. Being a priest or priestess requires a lot of patience and knowledge about the Voodoo religion. They have several duties such as performing healing rituals, holding religious ceremonies to call the spirits, holding ceremonies for the new priests or priestesses, telling voodoo fortunes, reading people’s dreams, casting spells, invoking protections, creating potions, and many other duties.

One hundred years ago, during the Salem Witch Trials, people who did not worship Voodoo but heard the word Voodoo, thought of Voodoo Dolls. Voodoo was associated with potions, spells and Voodoo dolls. People thought that some of the Voodoo worshipers were witches. Now, people don’t think of Voodoo as an actual religion.  Voodoo dolls were used as a tool to cause pain or illness to an enemy. Pins and needles were very often used to poke the doll and cause the pain. Worshipers believe that wherever the pin or needle was inserted into the doll, the focussed person or object will become very ill or feel pain. Originally, to use a Voodoo doll it was believed that you must call upon the spirits or the Loa. Now, if a Voodoo worshiper is using a Voodoo doll they do not always call the spirits, for most of the time people are evoking positive effects like love and blessings onto the doll. These days, more and more people are using Voodoo dolls that do not worship this religion. Voodoo dolls are very well known to the general pubic and are even given as gifts; some even as jokes. The meaning and purpose of Voodoo dolls have changed drastically in the last few hundred years.

Although Voodoo is the main religion in a few countries, Voodoo has been losing a lot of worshipers lately. There are many different reasons and theories for this. One reason is that people from the countries where Voodoo is most worshiped  are immigrating to other countries. A small percentage of this group still practice Voodoo in a new country but most of them change their religion or don’t practice a religion at all.  Also, the number of people who practice Voodoo in Haiti has gone down since the earthquake in January 2010. This may be because they lost trust in Voodoo and people are moving away from Haiti because of the earthquake. Now people are moving to America and bringing their Voodoo practices with them. Even though Voodoo is slowly becoming more familiar in the United States, worshipers still want to educate people about the religion.