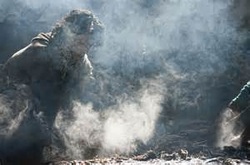 There has always been cultures throughout history that have made Blood Sacrifices to their God Deities or idols; all in order to please them and to gain favor from them. There were many times throughout the Bible that sacrificial offerings were made to God. In most cases a virgin lamb was used. You will note that in most animal sacrifices, the animal is to be virgin. This is because it is pure. You will also note that God only found blood sacrifice pleasing.  We have the story of Cain and Abel where Abel used blood sacrifice and found the favor of God and Cain used vegetables and did not find favor with God so Cain got jealous and killed Abel.  We have Abraham in the Bible who was asked to sacrifice his firstborn  son to God. Replacing animal life for human life. But then God stopped him for he was only testing him.  Let's face it, the Bible is full of Blood Sacrifice and killing all in the name of God. Makes you wonder doesn't it?

We have the Aztecs who were very big on Human and animal sacrifice. It was an integral part of their Religion. They had many Blood thirsty Gods that needed to be pleased. As they saw it, the offering of blood through human sacrifice ensured the perpetuation of the universe.  Spanish observers found the practice utterly revolting for Aztecs would take their victims... make them lay perfectly still while the High Priest took a stone knife and cut out their heart.

The Aztec priests were also into self mutilation. For instance, cutting their own genitalia and worst of all they would take a rope and embed it with large thorns. Then they would pierce their tongue and thread the thorn embedded rope through the tongue. The likes would have to be such an excruciating pain that they would leave their bodies and travel to other dimensions. Similar to the american Indians who would do piercing to achieve OBE's. Reference the movie "A man called Horse".

Now in the ancient days, the ultimate sacrifice was to be that of a virgin young boy. Even today human sacrifice goes on, but only in the most secretive places. There are some Devil worshipers (not Satanists) that practice the art. I myself have seen on video their practice of cutting out the internal organs of a human and then rolling around in the blood and drinking it which then led to sexual orgies. I can only add my opinion to say that they are sick for they usually use kidnapped children and runaways. This is something that the Police do not talk about because they are afraid of it. Most children that disappear usually end up this way and not in the hands of a molester. If the Law Enforcement weren't so chicken shit they would take care of the problem and also inform the public.

Now the good stuff. Sacrifice for conjuring of Demonic Beings. Now for the Truly brave Sorcerer, he will use his own blood which I myself am accustom to. But the norm is to use that of an animal. For instance, using white doves or chickens. There are many different animals that can be used according to who you are conjuring up. Remember if they are virgin animals, it is all the more pleasing to the Entity.  Why do you need to use blood? Because blood is life.  It has an energy, a life force. So Demons are attracted to it. Plus, it gives them some substance to take some form. If only you could see the demons attracted to the fresh corpses of the newly killed on the battlefield in times of war.

Now, when you sacrifice an animal and pour the blood into the Triangle of Solomon... it has only a life force time of about fifteen minutes. Once the life force is exhausted the Entity will probably leave. You can take note of a similar situation when Crowley conjured the Mighty Demon "Chorozon" in the desert. You will also take note that Crowley's partner was almost killed when attacked by the Demon and many believe that this conjuring of Chorozon led to Crowley's eventual death. This is because Crowley let the Demon take possession of his body so it could talk through him.

I know there are many of you who would never think of doing such a thing and that is fine. For you like many others may use Incense. For it is also pleasing to the entities and will give them something to help them take form.

One last note. This is not to encourage you to do such things, only to inform you! Head my words. Blood sacrifice is very dangerous, especially for the inexperienced Sorcerer!!! You will probably end up the victim yourself by the hands of the Entity that you conjured up!