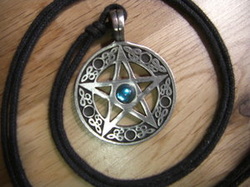 An amult, similar to a Talisman is any object intended to bring goodluck or protection to its owner. Potential amulets include gems, especially engraved gems, statues, coins, drawings, pendants, rings, plants and animals; even words in the form of a magial spell, incantations to repeal evil or bad luck.

The word "amulet" comes from the Latin amuletum; the earliest extant use of the term is in Pliny'sNatural  History, meaning "an object that protects a person from trouble.

What are Amulets and Talismans?
The word talisman comes from the Arabic word, tilsam which itself comes from the Greek word teloswhich means to consecrate or to initiate into the mysteries. A talisman can be defined as,"An object that has magical or miraculous effects and that can avert misfortune and bring good fortune when acquired". Amulet, is essentially another name for talisman. Amulet originated from the Latin word amuletum and can be defined as,"A lucky charm that has magical inscriptions and which has been consecrated through incantation".

Hence, there is no significant difference between amulets and talismans and it is only the manner in which they are perceived to have been created that would result in one term being preferred over the other. A common misconception is that such objects have to be kept in physical contact and be worn as pendants or lockets. This is not the case, they may be worn as talisman pendants or may be installed at a fixed location from where they positively influence the lives of those who have acquired them.

We do create for our clients personal amulets the amulet is designed and consencrated for one particular person. It works for no one else. It can be worn on the neck; placed inside a ladys handbag or a mans pulse. It cannot be worn on the body while having sex. And it should be taken off when having a shower or a bath. The amulet attracts luck, money, love  and health. It enhances beauty, produce success and brings happiness. It also offers protection against negative influences and black magic. To make this amulet, i will need a persons photo, hair and nail clippings and 1 to 2 drops of blood on a tissue. It should be noted however that this amulet does not replace a voodoo ritual